The Hope Street area was known locally as ‘Roughtown’, allegedly due to the reputation of its less than desirable inhabitants. Hope Street was originally built to house mill workers but as it was a main route to Glossop Low Quarries, up on the moor top, many of the inhabitants were quarrymen.

The name Roughtown was also used officially in census returns, parish records and in trade directories too!

One of the buildings in Hope Street was a pub called the Greyhound, built about 1829. It was known locally as ‘The Small Dog’ and the local Trail Hound supporters met here when it was a popular local sport.

Stone has been quarried from Glossop Low Quarry since the 1760s when a sudden expansion in building following the end of the Napoleonic Wars saw Low Quarry become increasingly important. So much so that in 1798 the Howard family spent £28 on the road to Glossop Low so the stone from the quarry, ideal for paving slabs and roofing slates, could be transported more conveniently. The arrival of the railways saw the decline of the slate quarries in the area as Welsh slate could be bought and transported more cheaply. A few of the buildings in the village, including the former Wesleyan Chapel, sport a Welsh tile roof. 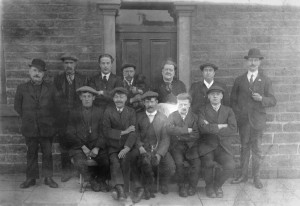 The landlady and her clientele pose for a photo outside The Greyhound (or ‘small dog’) on Hope Street, Roughtown

The Greyhound is now a private residence but it still retains the distinctive doorway. Look out for it when you are next on Hope Street (Roughtown) in Old Glossop